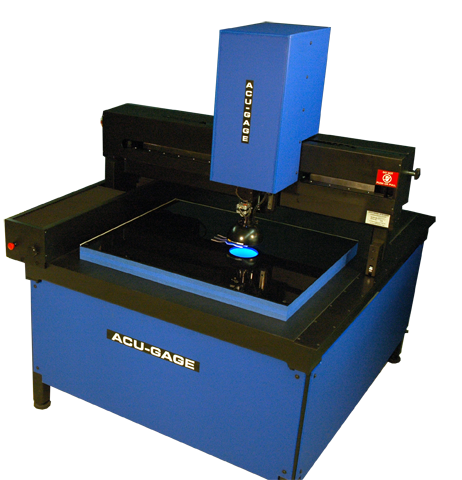 Acu-Gage Systems, a manufacturer of one, two and three axis non-contact video and laser measuring machines, has developed a system capable of operating on the shop floor in a harsh airborne carbon dust environment.

Acu-Gage Systems developed this machine specifically for extremely harsh manufacturing shop environments—such as the production of carbon disc brakes used in cars and in the airplane industry.  This system would provide a fully automated inspection of the pieces being produced using video/laser measuring technology.  The development of this design adds to Acu-Gage’s existing product offerings, tailored to specific industries.

This design incorporates two levels of bellow style covers to protect all bearings, rotating parts, guide rails, and positioning scales.  The design also includes positive, regulated, forced airflow throughout the system.  This airflow prevents airborne carbon fibers from entering the critical elements of the unit and destroying functionality and accuracy.

A NEMA enclosure houses all the system’s electronic components, which would be susceptible to electrical/electronic short failures if exposed to carbon fibers.  This entire enclosure is also under positive, regulated, forced airflow.  The system can be configured with 2 axis or 3 axis video only or video/laser sensor combinations depending on the end user’s inspection requirements.

Acu-Gage Systems, manufacturer of the largest video/laser inspection systems, is a privately owned company specializing in non-contact video and laser dimensional inspection systems since 1981.  For over thirty years, Acu-Gage has been producing measuring systems for the printing, medical, printed circuit board, sheet metal, military, aerospace, steel rule die, and many other discrete piece part manufacturing operations.  Systems are configured to the end-users’ requirements and can be one, two or three axes of measurement.  Manual or fully automated and can range in X and Y sizes from 12” X 12” to 48” X 96” with optional Z capability as required.  Larger specials are available upon request.